A Challenge Against the Pro's

Starting at City Park, an urban park and neighborhood in Denver, Colorado. The park is 330 acres and is located in east-central Denver. The park houses the Denver Zoo, the Denver Museum of Nature and Science, Ferril and Duck Lakes, and a boathouse.  Due to the early hour you will enjoy riding through streets of Central and Downtown Denver before it becomes busy.  You will pass Coors Stadium and many historic buildings.  Riding along 32nd Avenue, you will pass through Edgewater, Wheat Ridge, and Lakewood before entering historic Golden, home to Coors Brewery.

Although you are just a few miles outside of Denver, your first climb 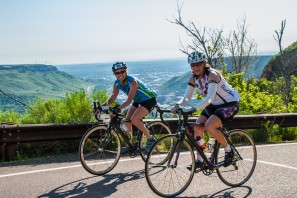 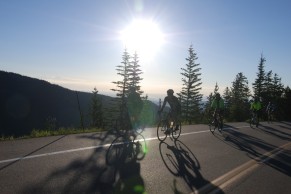 The new bike path will take you to Evergreen and Bergen Park. At an elevation of 7,200 feet,  Evergreen is situated close to Denver, while still attaining a mountain town feeling.   You will turn onto CO Rte 103 in Bergen Park and immediately start climbing through almost 16 miles of consistent, moderate grades with some steep, winding sections to Squaw Pass (9,807) but don’t be fooled as this is not the end.  You will continue climbing to the high point

After passing through the mining town of Idaho Springs, you will meander along the frontage road to Empire and the start of Berthoud Pass. Although, you will be well taken care of at the Aid Stations, Empire’s Sweet Shoppe is 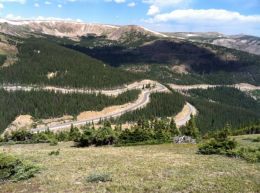 one of those spots you just cannot pass by especially before starting your ascent up Berthoud Pass!  The climb begins very moderately right outside Empire to Berthoud Falls, where the climbing really begins.  There will be 5 tight switchbacks as you ride into the Vasquez Mountains towards the Continental Divide. The  grade will level off for the last 3 miles of the ascent.   From there it is a fast descent with some sharp corner and long winding sections before it straightens out and you fly into Winter Park for a great celebration and awards ceremony.